He talks about life in the villages, breakthrough grass-root transformations and innovations inspired by nature and stories.

A man who grew up in the villages, immersed in the wonders of nature and ignorant of worldly life until he realised a problem his wife and sisters faced: Lack of accessibility to affordable sanitary napkins.

This man is an example of grit, determination and belief in one’s ideas. On mentioning what he achieved after staying away from his wife and family for 8 years, he says,

“I made a machine with iron and wood, whose products now compete with some of the biggest FMCG companies in the world.”

A practitioner of simplicity and on a constant quest for knowledge, he also believes that confidence in one’s knowledge might also abrupt their learning. He is Dr Arunachalam Muruganantham who skips on the prefix to get rid of the entitled perception it carries.

Talking about competitors and competition, he recalls his father’s business where they made handloom sarees on a wooden machine to be later sold without many market intermediaries. He mentions that his father did not wish to sell these to any mill who would later help the product reach the market for the sole reason that,

“My aim is to make affordable sanitary napkins and not to compete with anyone.”

Coming to the corporate world and its management styles, he talks about how he transformed their macro methods into micro methods. His machines also got major economic reforms in the lives of regular women. To reach out to more remote areas and to help women become financially sustainable, he facilitated loans at low-interest rates for anyone who wished to buy this machine and be a part of this revolution.

Talking about the success of his product, he says,

“Even if it has gone global, it is still connected to its roots and purpose: make sanitary napkins affordable”

About Knowledge and Growth:

We ask Mr. Muruganantham as to how does he ensure growth and he simply says,

He mentions how he believes in having a mindset that says I do not know and is ignorant of his existing knowledge with a desire to learn more. Even if that means he is the speaker or a panellist on the dais. He adds,

“If you think you know something, you tend to resist learning more about it. There is always a 0.1% scope to learn more. So why should I restrict myself with my thoughts?”

Mr. Muruganantham promptly points out how most of the designers in the current era try to make things complex and complicated thinking it would reap them better benefits. However, the right thing to do would be quite the contrary.

“Real innovation and effective designing is about making things simple”

Recalling his days spent in innovation, he mentions the main reason he took years to come up with his product was that he wanted to simplify it. And truly, a more complex machine could have been easily made by taking inspiration from the existing machines used in bigger factories. However, he wanted to target the under-privileged rural folk who couldn’t go to a service sector every time the machine failed. Thus, too much automation was not an option. He had to make a machine which is more on the manual side which could be easily operated by a newbie with little technical knowledge.  He wished to build a self-sustainable machine that could be easily repaired and mended by the user.

“If you make something simple, it will be used by the majority of the world. Now, one needs to choose how much impact one wants to make”

Thus, he remarks that even at schools we need to focus on simplicity and encourage Jugaad to make a bigger impact.

About ideation and solutions, he also says,

“Inspiration from nature is the real innovation. Everything else is re-creation or copy.” – Dr. Arunachalam Muruganantham

Talking about his childhood days, he mentions how days in the village would mean no gender gap until adolescence. Their learnings were directly from nature: observing insects or capturing a caterpillar in a jar to watch it turn into a butterfly. This helped them observe and understand nature and the rules of the universe from up and close.

Comparing his times to the current days, he says,

“We used to observe a frog in its natural habitat. Now they simply dissect it and put it on a board.”

Talking about the current ecosystem of investment and venture capitalism, he says,

“It is like waiting for a centipede to turn into a butterfly.”

Addressing the inquisitiveness of a child, he mentions that every time his daughter asked him questions that were beyond her maturity, he would simply divert her mind towards questions about nature and the environment around us.

He mourns the current mindset where even the simplest acts of nature like feeding an animal or helping the needy are captured and put up on not just Facebook, but even LinkedIn! He says, our lives have become such that,

“There are lots of green leaves, but no flowers.”

Talking about climate change and other shifts in nature, he rightly mentioned that we need to stop talking about solutions without understanding what caused it.

Innovation in the 21st Century:

According to Mr. Muruganantham, there has been no breakthrough innovation since the 20th Century.

“Corona had digitised everything. But, even the internet is an invention of yesteryears.”

Talking about some of the innovations that he looks forward to, he says,

“I want to eliminate the wheel. How long will we use one innovation for? I am waiting for the time when we have superconductivity on the roads. Anything that touches the roads will start moving.”

He recalls some of the stories from Indian Mythology and shows awe as to how we all know the stories and their possibilities but no one attempts at making it a reality.

Talking about the trend of corporate jobs, he says,

“Money will lose its value and commodities will gain more value. We need to look beyond monetary problems”

“Everything I made for my wife has now gone global.”

Recalling his days, he says, transformation happens in phases due to lack of accessibility. First at home, then the village, state, country and now global. Innovation is about creating value and doing something that makes lives easier.

While addressing young minds, he often mentions that everyone wants to join a Fortune 500 company or make it big in the corporate world. In spite of having stories of problems and how they were solved, we do not take the leap to be the change.

“Innovation stopped in the 19th Century. Now everything is incremental”

We ask Mr. Muruganantham, “what would be that one thing that you would do differently if you were 25 now?”

“Age is never the criteria to do something great. It is about doing the wise thing, always.”

He recalls a conversation about millennials wanting to retire at 40 as he wonders what they are going to do for the next 60 years of their lives. He says,

“Till one’s last breath, we should keep doing something that adds value to our lives and everyone associated with it.”

Improvise as a society:

He narrates a story about there being a hole in the boat and only two people trying to mend it. The others refrained for simply one reason: the hole was away from them. This, he says, is the current state of the society we live in. Nor are we intellectually developed to know the circumstances nor are we spiritually developed to help each other.

He time and again stresses about changing the curriculum at the lowest levels: from kindergarten to university. We need to shift from purely factual education to one which is more inclusive of the world and its people. Our education needs to make individuals responsible for the society they live in.

He also mentions how everyone wants a solution at their level. Very few think about how it can be eradicated and solved at the core.

Commenting on the current coronavirus situation, he draws a line between the crisis in urban cities and normalcy in rural areas. He says,

“We need more awareness and education about livelihood and self-sustainability”

Speaking about the internet, he says,

“Everyone is talking about the internet and digitalisation of everything. But you cannot grow onions on a screen.”

However, he strongly believes that the internet is a great platform to exchange knowledge and empower each other. He says,

“The group I am trying to serve does not have access to the internet. But the internet helps me reach more people who can take my product to them and thus serve the bigger purpose.”

Talking about how the internet has helped him in his purpose by connecting with experts and reaching out to more diverse areas. He says,

“I cannot go everywhere. But I can train someone in Bihar about how to use the machine with the help of the internet.”

Talking about the future of Sanitary napkins, He mentions his plans to raise awareness about synthetic napkins and promote the usage of organic ones. He wants users to know what they are using and the impact it has on mother nature.

“I want the trend in this industry to be such that we use things like aloe vera and bamboo fibre that are more friendly to the skin and environment.”

“I want to remove all the fanciness around it. It should be like cooking. No brand or label to it.”

“Education instils fear for our future. This fear restricts us from taking the risk of innovation.”

To a crowd that is only looking for opportunities, he advises,

“Look for a problem, find a solution to the problem, make the solution your lifestyle, market your solution and be the change.”

The girl who volunteered at the medical college.

My cause is now bigger than me. 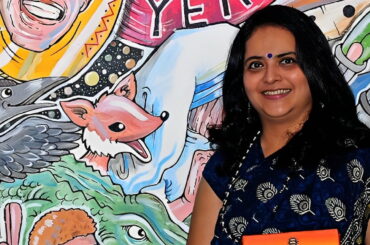 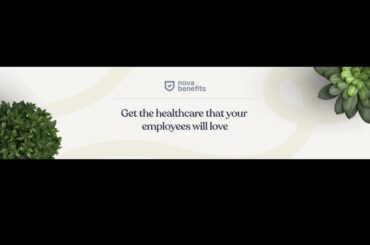 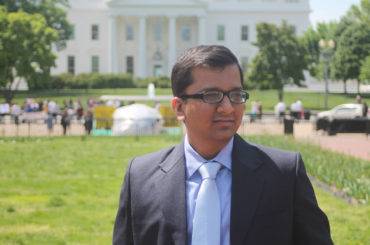